Women with symptomatic uterine fibroids endure painful menstruation, heavy menstrual bleeding, abdominal distension, urinary frequency and pelvic pain. These symptoms often get worse over time, leading to a deterioration in quality of life and loss of normal function. In many cases, major surgery (hysterectomy) becomes the only option offered by physicians.

Now there is another option:

How the Acessa procedure works 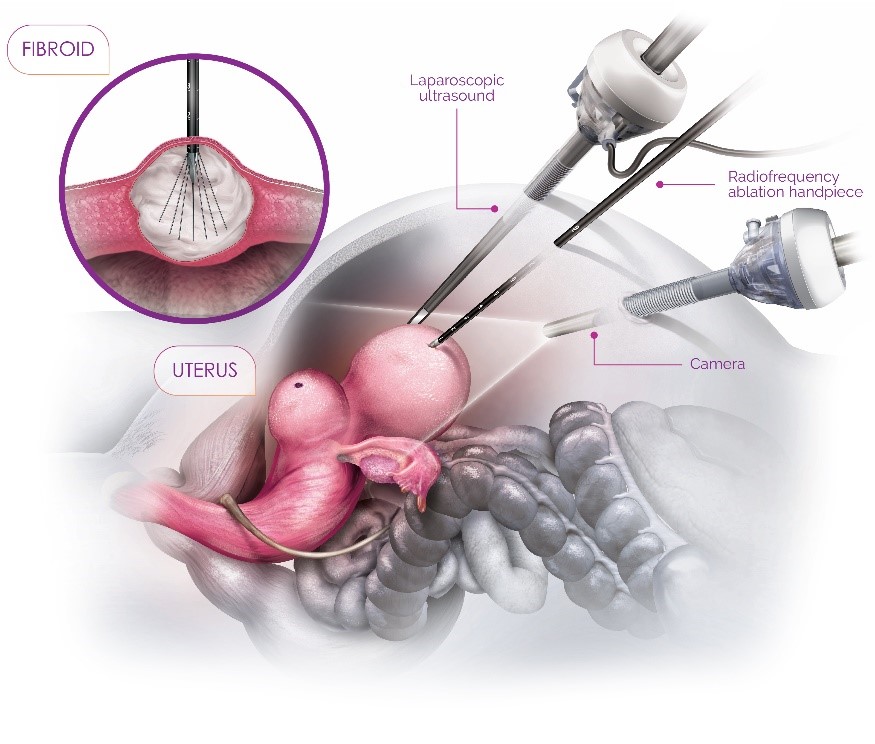 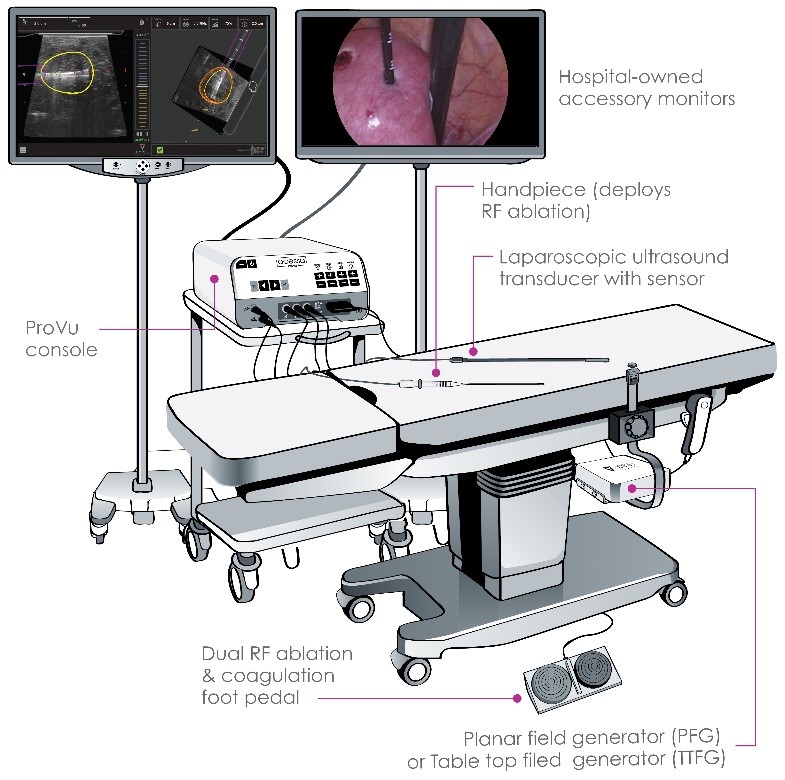 If the fibroids are not physically removed, how does Acessa work?

As a reminder, Acessa is a treatment for benign (non-cancerous) symptomatic fibroids. If patients are at risk for cancer, or malignancy, Acessa is not the appropriate treatment.

Studies show that fibroids do not have to be completely removed to solve symptoms. Killing the fibroid cells so they shrink and stop putting pressure on the uterus can solve symptoms. Physicians have explained that even a fractional reduction in fibroid volume can result in significant improvement in heavy periods, pelvic pain and bulk.

How does Acessa work?

Your uterus is fully mapped out before beginning the procedure, so that Dr. Oliver can determine the exact location and size of every fibroid you have. The Acessa system utilizes a small wand-like laparoscopic device that sends out radiofrequency waves. With the assistance of ultrasonic guidance, the apparatus’ tip goes directly into the fibroid. The waves Acessa sends out shrink (or fully eliminate) fibroids, without harming your uterus. During your procedure, Dr. Oliver can treat all of the fibroids you have individually, regardless of their size or location.

While Acessa procedures are minimally-invasive and are conducted on an outpatient basis, you will need to go under general anesthesia for the surgery.

Who is this procedure for?

This procedure is for pre-menopausal women (typically younger than 55 years old) who are tired of living with the
ongoing pain and discomfort of fibroids and are looking for a minimally invasive option that allows them to keep
their uterus and return to daily life quickly after the procedure.

When will I be able to return to work?

While the Acessa procedure is completed on an outpatient basis and it is fast, you will require a few days of downtime to recuperate. You’ll need a caretaker for the initial 24 hours, while you’re getting over the effects of anesthesia. Within 3-5 days, you should be recovered enough to drive and return to work. Getting fully back into your exercise routine, or returning to sexual activities, may take a few days longer. Talk with Dr. Oliver to determine any special limitations or concerns you may have.

Size and location of fibroids are important factors in what procedure is right for you. That’s why physicians do a MRI
or ultrasound prior to determining if you are a candidate for the procedure.
The Acessa procedure has been studied on fibroids up to 10cm, commercially physicians have treated larger fibroids.
The procedure is not recommended for pedunculated fibroids (fibroids on a stalk).

Do I need to have stitches at the incision sites?

Most likely not. During the procedure, Dr. Oliver will make 2 tiny incisions in your lower abdomen. Each one is around one-fourth of an inch thick. These tiny incisions are just big enough to get the laparoscopic devices into your abdomen and your uterus isn't cut at all during the procedure. More often than not, Dr. Oliver can use skin glue to seal up the incisions. Skin glue vanishes on its own as your incisions heal.

Will I be in pain afterwards?

During the procedure itself, you’ll be asleep, so you won’t feel anything. During this time, Dr. Oliver will likely give you an intravenous pain medication, so you will wake up feeling pain-free. When you return home and for a couple days following your procedure, you’ll presumably have some cramping in your lower abdomen. This is normal and isn’t any worse than menstrual cramps. Dr. Oliver can prescribe you painkillers if the pain is keeping you from sleeping or going about your daily activities.

How does Acessa compare to other treatment options?

Vs. Hysterectomy – Acessa keeps your uterus and has a quicker recover and less scars, however, hysterectomy is a
definitive treatment, so after recovery, there is no chance fibroid symptoms will return.

Vs. Myomectomy – Acessa is typically considered less invasive than a myomectomy, even a robotic myomectomy, because there is less blood loss during the procedure, less scars and no cutting and suturing of uterine tissue. Also, for patients with multiple, small fibroids, physicians often note that Acessa can be a more accurate procedure because it utilizes an ultrasound to find and target fibroids whereas most myomectomies the surgeon is only using his or her eyes. However, because myomectomies remove the fibroid right away, patients with larger fibroids may experience quicker relief from bulking than with Acessa, which can take longer to shrink fibroids.

Vs. UAE – Acessa is typically considered by gynecologists a less invasive procedure than UAE because it does not
require an overnight stay in the hospital and typically patients report less post operative pain, however, Acessa does require general anesthesia and incisions in the abdomen, whereas UAE does not always require anesthesia nor as visible incisions 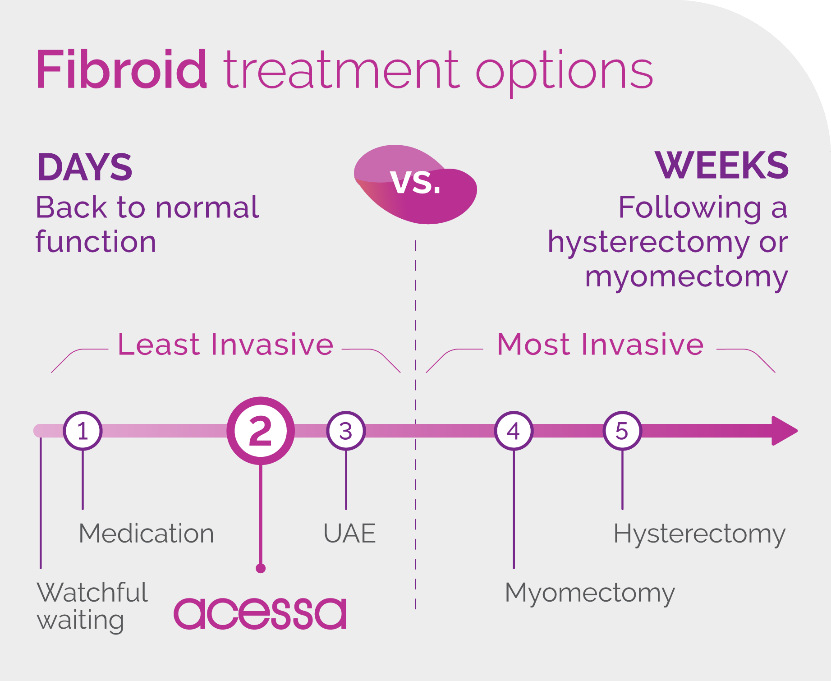 The Acessa procedure uses an innovation called radiofrequency ablation, and treats each fibroid by applying energy through a small needle array. The surrounding normal uterine tissue is not damaged or otherwise affected. Over time, the treated fibroid tissue shrinks and may become completely reabsorbed by the body.

Acessa is performed under general anesthesia, and only two very small (approximately a quarter inch) abdominal incisions are needed during the procedure – there is no cutting, suturing or removal of the uterus itself.

Have a question about Acessa?